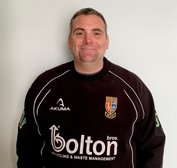 IRFC are pleased to announce the appointment of Nikki Holley as IRFC Colts Head Coach for season 2022-23 - it has also been agreed that his appointment is on a 5 year basis to maximise continuity in the transition of players into senior rugby.

The club would like to thank the fantastic work carried out by John Reynolds and Paul Hollis within both the Age Grades and Colts programmes previously in which many players have developed under their guidance both as players and individuals.

Nikki has been a member of IRFC for over 25 years and played for the first XV (playing in London 1-the equivalent of Regional 2 now), and captained the Magpies for 5 seasons, so has a strong understanding and affiliation of the club.

Coaching wise Nikki is lead coach for Northampton Saints U16 North Essex and Suffolk Developing Player Programme situated at Colchester and is also on the coaching staff of Eastern Counties U18 programme, as well as having coached the now first year Colts through the Age Grades at IRFC.

Outside rugby Nikki is a Front Line Response Officer and has recently served at COP-26 Glasgow and G7 in Cornwall, the skills required for this role will no doubt be transferable to the young players within the Colts squad alongside rugby skills carried out.

Director of Rugby Marcus Tobin quoted “It is fantastic that a coach of Nikki’s experience and understanding of player development has undertaken the role of Colts Head Coach, the Colts is the pinnacle in terms of Age Grade within the IRFC Academy programme leading to players transition into senior rugby.

It is important to carry on the amazing work carried out by all Age Grade coaches leading up to this Age Grade, with the competition for players being so fierce within the region it is vital that we transition as many players as possible into senior rugby and match an environment that aligns with their skill level and commitment. Head Coach Jim Clark places a huge emphasis on transition and player development within his coaching plan looking forward with IRFC and will be actively involved in supporting the Colts programme”

The colts have an exciting programme in their own right for the 2022/23 season, including entries into the National and Eastern Counties Cups, as well as participation in the Eastern Counties conference programme. We believe this provides and excellent stepping stone towards a senior rugby career at the appropriate levels for individual players. Nikki and the other senior coaches will be working with other stakeholders (including Northampton Saints, representative bodies and schools) to manage players workloads and development, so they can enjoy all that club rugby has to offer whilst being sympathetic to demands on players’ time both from rugby and other activities.

The programme started this weekend, with preseason sessions on Sundays from 10am to midday. As the season draws closer, training will be aligned midweek alongside senior sessions to help player development and transition. All U17 (last year’s U16s) and U18 players are invited to come along and enjoy the summer preseason programme, and new players are also very welcome.

In the event of any enquiries, please contact Nikki in the first instance ([email protected]).